The Ursuline Franciscan Congregation which is an indigenous congregation was founded by Fr. Urban Stein S. J. the first parish priest of the Rosario Cathedral Church on 10th of April 1887 on Easter Sunday. 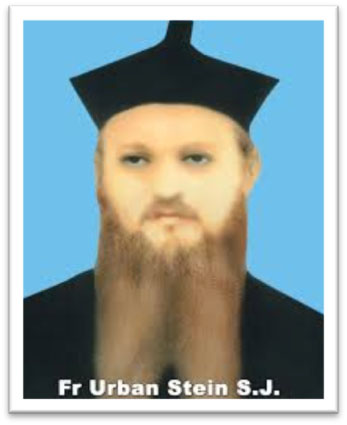 St. Ursula Convent is the cradle of the Ursuline Franciscan Congregation.

1. Location:
St. Ursula Convent is situated in Mangalore, behind the Rosario Cathedral Church. This is the first house of the Ursuline Franciscan Congregation and is called ‘Foundation House’.

2. Vision:
To bring about God’s kingdom of Love, Peace, Justice and Restoration of Human Dignity and Cosmos.

3. Mission:
Our mission has its origin in the mission of Christ, and follows our founder’s inspiration of service in the church and in the society.

4. Patron Saint of the Community 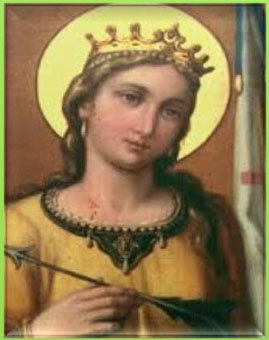 6. Present Superior: Sr. Lydia Serrao
No. of Sisters at present:17 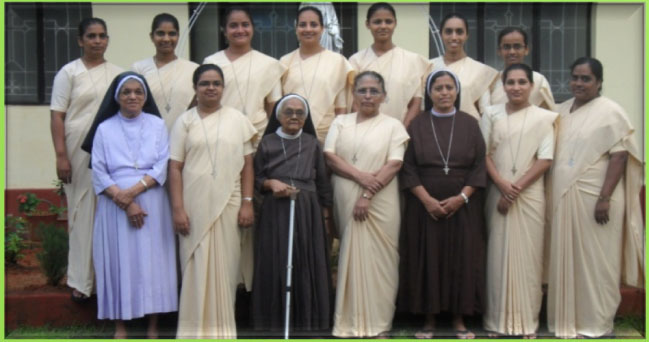 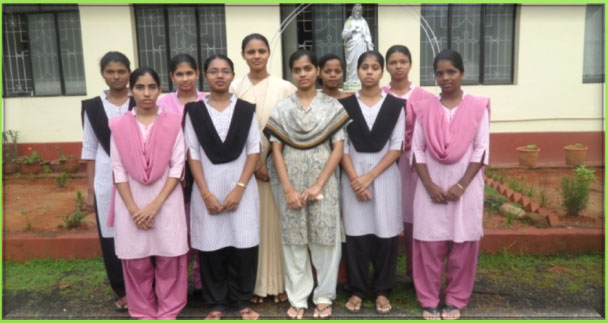 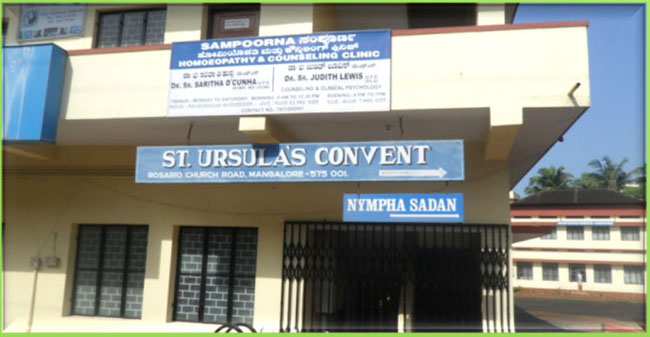 9. Motto of the Ursuline Franciscan Congregation:
“Pro Amore Dei” (For the Love of God)
Obedient to these words every Sister of Ursuline Franciscan Congregation should make this the purpose and goal of her whole will and aspirations: to fill her soul with this great all-embracing love of the Redeemer and with this love to serve the Brothers and Sisters.

10. Charism of Ursuline Franciscan Sisters:
“Launching deeper into the life of the people solely ‘for the love of God’ in simplicity of life, and proclaim the message of the fullness of life of God’s Kingdom.”

11. History:
St. Ursula Convent Bolar is the foundation house of the congregation, situated in Mangalore, behind the Rosario Cathedral Church. This is the first house of the Ursuline Franciscan Congregation. It was mother NymphaFernandes who erected this house in 1901 at Bolar. 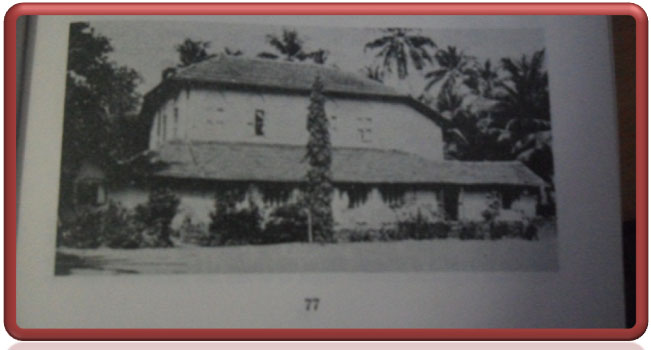 Bolar was important from both political and economic points of view. The British port and the army authorities had their headquarters here. This plot of ground was obtained from the Cathedral on a nominal rent.MotherNymphaFernandesbuiltthe large storied house with a chapel attachedwith funds collected from the elite of Mangalore. The house turned out to be the centre of a variety of activities for the members of “The Company of St. Ursula”. Regular meetings of the Company were held here. So also retreats, feasts, catechism classes and sodality meetings were conducted. The building housed also the half-day free school for the poor and needle craft for young girls. Apparently in view of all this, in 1903 SrsTreasa and Flora Castelino came to stay here permanently. In the following year Mother Nympha herself did the same, thinking nothing of the sacrifice she made in giving up the comforts of her own affluent home. It was in 1905 all these sisters had to go back to their homes due to some unavoidable circumstances. But a few years later they returned back. The obituary of mother Nympha states that she passed away at St. Ursula’s in 1909.

When the canonical status was granted to the members in 1934, which made them ‘Catechist Sisters of St. Ursula’, a novitiate for the Congregation became a must. There being no other convenient place it was started in the room upstairs, used as a chapel so far. A verandah was added to the existing building and used as a dormitory. It was around this time, Mother Rose Saldanha-nominated Superior General obtained permission from the board of directors of the Cathedral to construct a school building opposite to the Convent within the premises. It was ready by June 1937 and the classes were shifted to the new building.

With the upgrading of the school more class-rooms were required and this necessitated the shifting of the novitiate to a more conducive place. Accordingly the transfer was made to Holy rosary convent, Jeppu in 1948. The school itself got an additional new block in 1952 through the efforts of Mother Mary Agnes Mathias and of the then Superior Sr Rose Marie, and by the generosity of Mr. S. F. Noronha who funded the project in the name of SrSeraphine Noronha, member of the Company.

In 1956 the Generalate was shifted to Holy Rosary convent, Jeppu. In the following year a chapel was added to St Ursula by Sr Eliza, the then Superior. The remodeling work was begun in 1984 by the then Superior Sr. Gabriel and Sr. Edilburga and was completed in the following year. The original storied structure built byMotherNympha was retained practically intact, and this was not only for reasons of sentimentality but the structure is even today as sturdy as ever. In June 1986 postulants came to live in the house. In October 1986 St. Ursula Convent became the headquarters of west Karnataka Region as Sr. Victoria, the first Regional Superior came to reside here.

St. Ursula Convent is a multifaceted one. Since 1990 it sheltered the student sisters of west Karnataka region later Mangalore Province, Mysore Province and North Province who pursued their B.Ed., D.Ed. and other studies in St. Ann’s Institutions and in St. Aloysius Institutions. On April 28, 1998 Canara Bank Building Block was inaugurated for the self sufficiency of St. Ursula Convent. The residency of the student candidate was shifted to the same block first floor the same year. Approximately 20 to 30 students pursue their academic studies as well as their initiative studies to the Congregation.

St. Ursula’s Hr. Pry. School building was built in the year 1937. The school from its inception till 1996 educated the poorest children of the locality. As the number of students was decreasing, the school was amalgamated with Rosario Hr. Pry. School on January 4, 1996. The records of the school, teachers and students were taken to Rosario School premises but the school name was retained. The remains of the school building were repaired and a hostel for ladies was provided. A hostel for boys with a capacity to serve 25 boys was built and inaugurated on 27 September 1996.

St. Ursula Convent served as Regional House of West Karnataka Region from 1986 to 1997. Since West Karnataka region became Mangalore province on December 26, 1997 and had its Provincialate built at ShanthiDhamDeralakatte, the headquarters also had a change. The importance of St. Ursula Convent still continued as the head of Bolar Zone from 1986 to 2009. Sisters of the zone would gather in this house for zonal recollection, Vocation Promoters Meeting and internal checking up of Finance. The first building of St. Ursula Convent which was put up by Mother NymphaFernandes is retained as “Memory Hall”. 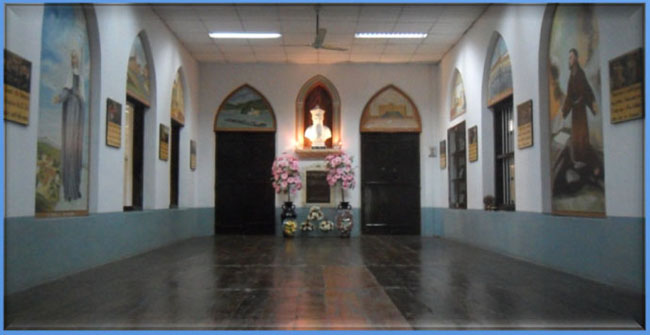 On March 24, 1995 land was bought from Mr. Rosario for 14 lakhs and land registration was made on July31, 1995. The old building was demolished on November7, 2006 and the foundation stone was blessed for the building “NymphaSadan” by Don Francisco. The building was officially blessed by the Bishop Aloysius P. D’souza on December6, 2007. NymphaSadan serves the purpose of preserving the name of Mother NymphaFernandes to the posterity of the Ursuline Franciscan Congregation. It has the capacity of serving 28 senior citizens. 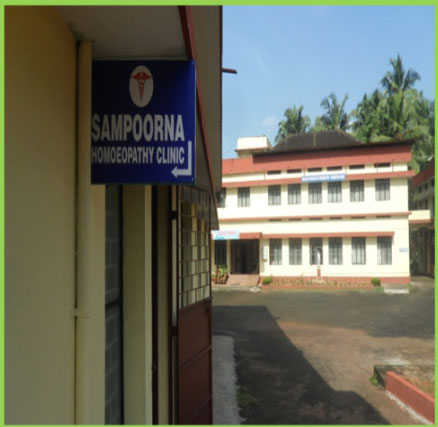 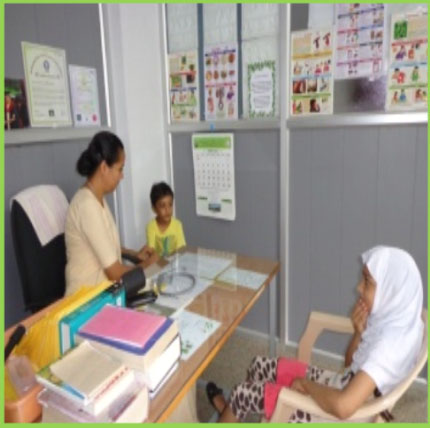 ShanthiSandesha Trust®: Under this Trust of the Mangalore Province, A Social Work Center was started in the year 2013, with the purpose to Restore Human Dignity and Cosmos. This is mainly for the protection of children, women and youth.

UFLA (Ursuline Franciscan Lay Association) : In memory of post centenary silver jubilee celebration of the congregation, in the year 2012 on April 12th the Ursuline Franciscan Congregation has opened its portals to the catholic men and women of good will who wish to join hands with its members with the fulfillment of the mission entrusted to it by the Founder and the Pioneering members. St Ursula Bolar unit has 18 members in it.

They are called Ursuline Franciscan Lay Associates and are sharing in the charism and spirituality of the congregation.Through their collaboration and participation in the life and ministry of the Ursuline Franciscan Sisters they are supporting, enriching and challenging each other to live the fullness of their response to the Gospel and play a luminal role in today’s world.

Therefore Ursuline Franciscan Lay Associates constitute all those Catholic men and women who wish to strengthen their Baptismal Consecration and respond to the sacred commission of proclaiming the Gospel of our Lord JesusChrist in order to build up the reign of God in the context of today.Without binding themselves to the sacred bonds of poverty, chastity and obedience, filled with the evangelical spirit and sharing the vision and charism of Fr. Urban Stein, our Founder, and the Pioneers, they shall be sent forth as leaven of love in the world through their witness of life. 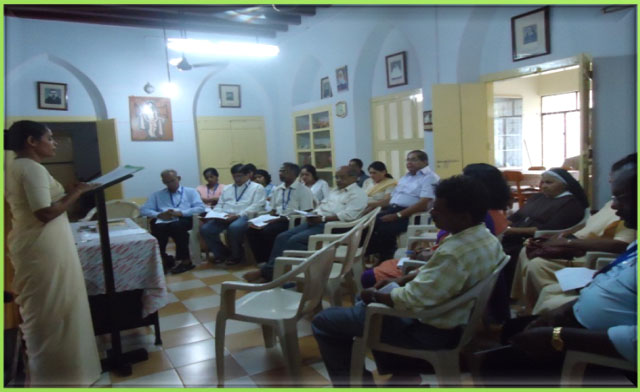 Motto: “For the Love of God”.
Vision: “To Promote Life, Life in its Fullness”.
Mission: “To Witness and Carry Forward the Mission of Jesus”.